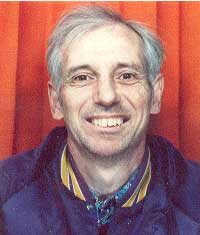 Paul Koslouski was released from jail today. They gave him a bus ticket back to Tacoma, Washington. He was unable to retrieve his Heaven van and personal belongings.

Paul Koslouski was arrested in Crook County, Wyoming, after being stopped for not seeing a stop sign. He was returning from a cross-country mission that took him from Tacoma, Washington to the East Coast. He has been in jail since February 22, Year of our Lord, 2004.

Paul writes the following letters from his jail cell:

I met with the Public Defender today to discuss the letter and information I mailed her last week. The information discussed the illegality of a driver's license and insurance. But she would not make a motion to dismiss. Monday (March 8th) I received an order setting scheduling conference for Friday March 19th. Part of the document reads: After the expiration of such limits, the Defendant may plead guilty to the charge(s) as filed, the State may dismiss the charge(s) or the matter will be tried. This is in reference to a jury trial. Also a Pre-trial Conference trial date set.

They still fail to recognize the church and deny me my religion. I gave her a copy of my Discovery today. It was entitled Statement of Fact and Law. Carmen Patterson is my Public Defender. Her FAX number: (307) 682-0274. Miss/Mrs. Patterson says Washington state still says I have a suspended license for whatever reason. I mailed you information on the case but it came back not deliverable as addressed. The only thing I didn't have on the envelope was the P.O. Box. I'll try to send what information to Glen. The public defender wouldn't even subpoena the judge and prosecuting attorney because I said they discriminated against me and were already prejudiced, also. Even the guards will not allow me phone calls. Maureen told me Cleve called but someone wouldn't allow the call. I recently received an encouraging card and a note of what is happening at home. Bills are mounting up all because I'm not there to help pay them.

A friend in Idaho wrote to tell me the owner of the Idaho Observer of Spirit Lake, Idaho wishes to do a story on Embassy of Heaven. I believe his name is Don Harkins.

On Friday, February 27, 2004, at around 9:15 a.m. I was taken to the judge in regard to the abstracts you sent me as proof of the validity of my Kingdom of Heaven license. The prosecuting attorney had a copy of the documents which she shared with the judge. Neither would recognize the Church. They both stated they did not recognize anything but State-controlled churches. Again I pleaded innocent and the judge changed my plea to "not guilty."

The judge took it upon himself to make me an indigent and ordered a public defender for me. About an hour later I was talking to Carmen Patterson, the public defender. In our conversation Ms. Patterson said: "They do not care about your religion or God." When I asked her who the injured party was, she said, "the State." Earlier at the stop, the policeman had stated that I was insane when I said God was my insurance.