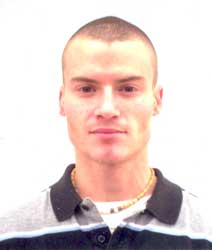 Released from jail July 29th after serving 2 1/2 months. He was put in isolation for 1 month because he could not give jail personnel a social security number or driver license and would not acknowledge the "old man". He said jail was really hard at times - it's more difficult being in jail for the Kingdom's sake, than for breaking man's laws. He said the two jailers that were the toughest on him by the end were calling him by his new name. He advises to stand on His word, not on your own strength. Jason said that after having spent that much time in jail, he really got to know the Savior's presence.

Jason Israel was arrested for not giving a date of birth to a policeman. He was on his way to a fellowship meeting in Virginia. He was pulled over because the police said they did not recognize his tags. His car was also impounded. Please pray that Jason stays firm in his convictions to remain separate from the kingdoms of the world.